After an amazingly inspiring night at Bar Basic, I briskly hurried over the 15 blocks to the House of Blues San Diego to see Bob Schneider perform. Glad to see my press pass waiting for me, I rushed down the stairs, bypassing a stiff drink for a spot near the front of the stage. Sadly, I missed one or two songs of Bob’s set, as well as the opening act, Smile Smile, whose music I’m sure I would have loved based on the dancy, energetic stuff that I have listened to over the internets.
Over the years I have seen Bob’s sets diversify from the solo, sappy, ballad-singing songwriter to the drunken rebel-rouser, cursing and rocking with a full band backing. This show was another experience to add to the list. To understand the context of the contrast… recently, as in less than two months ago, Bob played a KPRI show solo at the Bernardo Winery to an all-ages crowd. Roger and I watched as he appeared to struggle finding age-appropriate songs, songs he could play solo and/or songs that were in his current playlist. If that was your first introduction to him, this HOB show must have come off as a shock. For the KPRI chill, happy family-types, you’re probably thankful he didn’t go so far as playing “Sons of Ralph” or better yet, “Ass Knockin’.” 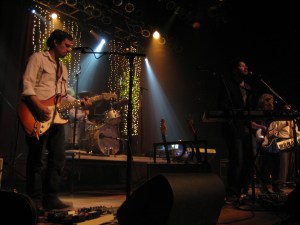 After several years of playing to Belly Up Tavern crowds, moving back to the House of Blues main stage brought the inevitable disconnect between the audience and the performer. Bob tried his best to connect with the crowd by using eye contact to those individuals he could see through the glaring stage light. I smiled as I caught a bit of that action during “40 Dogs (Romeo and Juliet).” Sweetness.
Unlike other musician-types, he is not the type to make a standard set list. He’s more of just going on the fly kinda guy, rarely informing the rest of the band of the path they are taking. They just have to be ready. At one point in the set, I watched as Bob leaned over to the lead guitarist and said, “Feel Good”. The guitarist smiled in acknowledgement, and started setting up for the song. However, as Bob launched into “Metal and Steel”, the guitarist’s smile was crushed as he rushed to catch up to the correct tuning. After “Metal and Steel”, Bob did end up playing “Capn’ Kirk (I Just Want to Feel Good)”. Was this a case of a scatter-brained musician, purposeful prank or me, completely missing something? We’ll never know.
The newest addition to the Bob Schneider band is comic relief, Ollie (I think that was his name). His primary job was playing trumpet, keytar, accordion, but attempted to add to the show by performing slip-stick comedy falls, crazy dances and a variety of extreme facial expressions during nearly every portion of the show. His behavior struck me as odd, since Bob Schneider has always served as the focal point of the performances. In essence, Bob shared the stage with Ollie, forgoing his usual ego (or just taking some sort of a break from the crowd adoration). The crowd loved Ollie, however, I was annoyed. His antics really didn’t fit in to the overall feel of the show. But again, perhaps it was just me.
As for the crowd, it could be best described as a reflection of the Gaslamp scene. Club-going frat boys and shiny, skimpily dressed girls clamored toward the stage, while the typical Belly Up goers of the older, upper-middle-class-hippie variety sat up in the balcony and left well before the end of the night. Bob again catered to his perception of the crowd. Songs with mambo and other Latin rhythms provided a groove you could really dance to. Club-like beats from “Mudhouse” bounced the house and “Ready, Let’s Roll” finished off the night like the aftermath of some good sex. 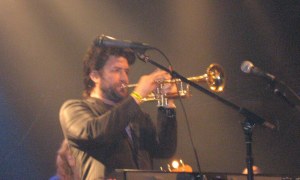 Continuing the awesome tradition, Bob recorded the night’s performance and sold those CDs immediately after the show (also known as the Frunk collection). Every show is unique. Not a cookie cutter in sight. I usually purchase one from each show I attend but due to the long line and knowing it will eventually turn up in the archives, I skipped out on this one.
Advertisement