Roger and I celebrated our 3rd anniversary this past Sunday at The Casbah. Three years ago on the Sunday of President’s Day weekend (not the 14th of February… that was just incidental this year), we said our vows into the mic on the stage of the most important music venue in San Diego (at least to us). Here is an article from the Union Tribune that tells the whole back story.

Thanks to a few friends at FM94/9 for helping us to promote the show through the concert calendar listings on the Friday before and the locals only show on the evening of. We were also amazed that the show was even listed as alternate plans for both CityBeat and the Reader. SD Dialed In listed our show in her listings and the show was featured on The Casbah website. We thank you for the extra mentions.

The best part of the evening was all of the people who came up to me telling me how much they enjoyed the bands, including ones they had never seen before. Introducing new bands/music to people is something that both of us love to do and is one of the main reasons I started blogging. So for those of you who didn’t make it out, for whatever reason, we still love you and we hope that you keep reading to find out about all of the cool bands that played on our happy day.

Kicking off their West Coast tour, Tan Sister Radio finally made it to The Casbah stage for their first time ever. These young ones at 19 years of age each, from Encinitas, rock harder and tighter than most bands that have been around twice as long. I feel lucky to know these guys and to have been able to watch them grow through the years (here is an earlier post about them). They are true to their art, sticking with each other and their music even after they graduated high school. Their gritty, grunge-rock style music harks back to early Kurt Cobain but with pure innocence and honesty. Just good kids who really know how to play.

For the past two years we have talked to The Silent Comedy about playing our anniversary show, but this year the stars aligned and they were able to commit. Changing it up from their usual jumping, dancing, sing-a-long vibe, in honor of our wedding anniversary and Valentine’s Day, they decided to bring the energy down by playing mostly ballads and slow jams. However, even their slow songs have a beating pulse that makes you want to move.

The change up frightened The Silent Comedy groupies, and fearful that that they wouldn’t hear their favorite song (for the um-teenth hundred time), they proceeded to yell out during every song break, “Gasoline! Play, Gasoline!” Had they been sober or smart or both, they would have noticed that Gasoline was clearly written down on the set list. Roger and I are slightly fearful that the song may disappear due to fans like these.. ala Radiohead’s Creep or Nada Surf’s Popular. All I have to say is, don’t do it… as much as it pains you, embrace the song and the people’s love for it. 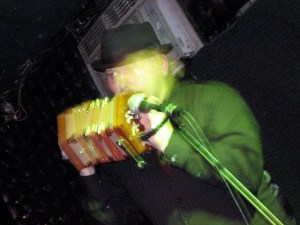 And the headliner of the evening was Listening to Rocks… who? That would be Roger’s band with Dave Rizzuto on the Daisy Rock guitar, Jon Kanis on bass and Brad Smith on drums. In 2008, Roger formed Listening to Rocks as a one-off band to play at our first anniversary at The Casbah with Bunky and Get Back Loretta. The band, only a couple rehearsals in, asked, “Can we keep this going?” Since everyone was having fun, they kept it going.

As for the name of the band, when looking up online to see if certain band names existed, Roger came across this guy from China’s MySpace page stating that he “enjoyed listening to rocks…” as in rock music. It had a good ring to it, so he kept it. Funny though, he never actually looked up that name to see if anyone already had a band by that name.

The band has certainly evolved over time. Since there are really three front men to the band, they have found that the songs didn’t always flow and sets sounded fragmented with three distinctly different music styles. In this recent performance, they seemed to gel as one band. It is also evident in their new recording done at Chaos Recorders. Check out their MySpace for a listen for yourselves.

Halfway through the set, I joined the band as the harmony vocals for a Nada Surf cover of “I Like What You Say.” If you missed it, so sad. But I can’t say that this will be the last. I certainly had fun up there.
The night would not be complete without Roger serenading me with “Kiss Me,” one of the two songs he wrote for our wedding. It sums up our feelings for each other and is another reminder of our love: “Kiss me again, like when we wed…”