Sweet, wholesome and so damn cute. Ok, I couldn’t resist. Langhorne Slim swung back into San Diego last Monday for an in-store at M-Theory Records and a show at The Casbah to promote his new album, Be Set Free. 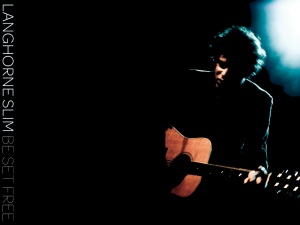 Roger and I can’t resist a chance to take Thomas to live music shows. And this was no exception. I actually skipped the first part of derby practice to head over to M-Theory Records for this family outing opportunity. Their late arrival due to The Casbah sound check allowed us to pick up a couple CDs that we’ve been missing including: Contra from Vampire Weekend, The Crow from Steve Martin and Phrazes for the Young from Julian Casablancas. 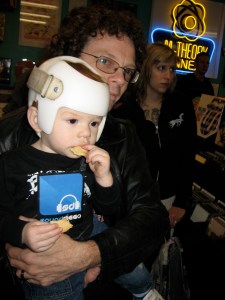 Langhorne Slim takes your senses to Appalachian Mountains with the song-writing style that you can only imagine stems from backcountry love and appreciation. Many define his style as simply folk music, but hearing the tinge of banjo and passion of the words, you can easily see that it is much more. He invites participants to engage in his gospel-like performances, uplifting both spirits and “spirits” of the drinking variety alike. 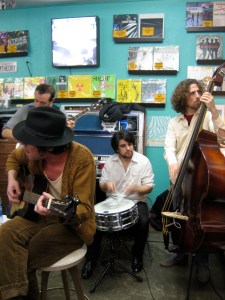 The acoustic set started with “Back to the Wild” and “Cinderella,” then prompted the crowd for requests. My brain was thrown for a loop since these were my two favorite songs off his newest album and I never thought they would actually play “Cinderella” in this setting. Luckily, someone else jumped in with a request from an earlier album. For this intimate session Langhorne hid coyly beneath his fedora cradling his well-worn baby guitar with a golden glittered pick guard, appearing as an artist internalizing his craft.

Returning from practice to The Casbah for an additional dose of Langhorne, I missed the opening act April Smith and the Great Picture Show. From what I have heard of them, I truely missed a good show of the old-timey variety. 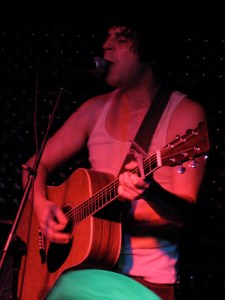 The Casbah performance varied greatly from the deeply personal insight that caught a glimpse of earlier. More than toe-tapping, you could say it could be best compared to complete revelry. With the same uplift of the heart and soul, Langhorne delivered some of my favorites from his self-titled album,  “Diamonds and Gold,” “Worries” and “Hello Sunshine” along with newer cuts  “I Love You, But Goodbye” and “Say Yes.” 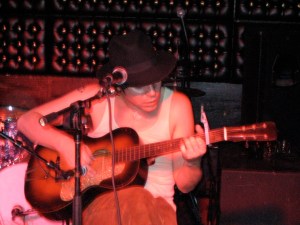 Satisfying my palatte for good, honest music, Langhorne definitely made my day.