It has been a while since I have posted anything about Thomas. So here goes. The boy is, well just that, a boy. He really has grown, a lot! Currently, he is a little over 14 months old, but thinks he’s a 2 year old. At daycare, he sits with the big kids at the table and *tries* to bring his dishes to the sink when he is done, while the other kids his age are still in their high chairs.

His walking is now running and if you don’t give him what he wants, you will receive a meltdown. The tantrums are daily and a bit hilarious, but sometimes frustrating. At least we haven’t had him breakdown in public, as he loves being out of the house and around other people. Here he is at Queen Bee, dancing and rocking out with his drum sticks to School of Rock’s house band. 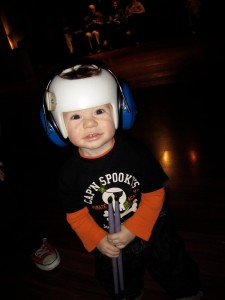 The other night I sat down to color with him, and thought I would write down all of the words he knows, aside from ma-ma, da-da and Tee (aka Thomas), and was impressed to find that he has a 25-word vocabulary, at least. These are words he is able to vocalize, he understands the meaning and I can distinguish what he is saying. There are other things he is saying that I don’t understand and other things he understands (like nose, eye, head) that he hasn’t said but points to them as they are said. 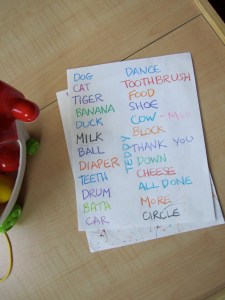 Last night Roger was playing with Thomas and he started to imitate the barn animal sounds from one of his toys. This was a first. I might have to add quack-quack to the above list.
After recording, we played back the video and he was following along, imitating the sounds. Learning a bit more about how an owl sounds. Whoo-hoooo!

One thought on “Word Progression”