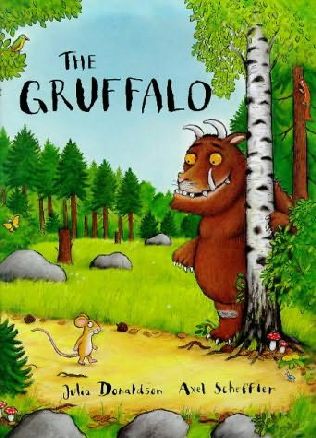 This phenomenon of a children’s tale has somehow escaped the United States entirely. The catchy rhymes and witty storytelling have made “The Gruffalo” a sensation in the UK since 1999. Written by Julia Donaldson and illustrated
by Axel Scheffler, the book has been translated into 40
different languages. When I went to the UK this summer, I picked up a copy and quickly it became one of Thomas’s favorite books.

Last Christmas,  Magic Light Pictures produced a half-hour animated
special based on the book and BBC aired it in the UK. And now the short film has qualified, along with 33 other films, to be considered in the category of Best Animated Short for 2010 Academy Awards. Members of The Academy of Motion Picture Arts and Sciences will vote to narrow it down to the five nominees for Best Animated Short Film Oscar. Pretty cool.