Roger and I are so lucky to have an amazing life together with our son, Thomas. And once a year we bring it all back to the Casbah where we said our vows on stage, with 200 of our closest family and friends. Owner, Tim Mays lets us take over and book bands for the night, inviting the world to share the love. And last Monday, the love was felt by everyone present.

Patrick Dennis of Wirepony and Truckee Brothers kicked off the night with a solo set of songs of love. Well most of them where about love. Through a misinterpreted text, he believed I requested the most violent, brutal anti-love song, Right Hook of Love. I only had it stuck in my head at the time. It’s a great song, so I didn’t mind breaking the theme. 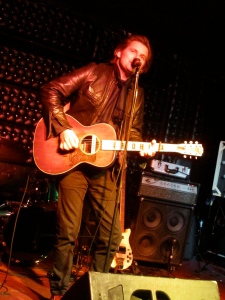 I was a bit sad Patrick’s talented son, Aaron wasn’t able to make it, but we understand that playing with his own band, Tan Sister Radio takes priority. It doesn’t mean that he wasn’t missed.

During the breaks between bands in the Casbah’s Atari Lounge, Roger’s band, Listening to Rocks played two short sets. With a bit of practicing, the band sounded more solid than I ever remember. What once felt like 3 people each playing their own songs with their own styles, now sounds like one cohesive unit. I even had the chance to sing a bit including a Nada Surf cover, I Like What You Say and the debut of the song Roger and I cowrote, Can’t Wait.

Back on the main stage, Swim Party continued the love fest with beautiful music accented by colorful bubbles of light. The harmonies and rolling chords truly feels like you are riding the ocean current while the fishes and creatures of the sea move alongside you. During the set, Robin Roth proclaimed Swim Party’s show at the Whistle Stop on Friday, March 11 to be a celebration of my birth. Yay me!

After a second Listening to Rocks set, Rafter takes the stage sharing his set will be an “ode to love, marriage, sex, family and death”.  Death? Ok? Let’s do this.

Rafter’s 2010 release, Animal Feelings hit #1 in my top ten of last year. I cannot say enough good things about this guy.  A family man himself, and a purveyor of love, he pulled together a set of feel good songs including “Fruit” and of course, “Feel Good.” Funniest part? The banter between songs. I don’t think I’ve heard much more than a song name before, but prior to each song he gave a short awkward description on how it is connected to love. Best description came with “A-Frame,” where he described how his father taught him how an A frame house is the strongest house and relating it to two people leaning towards one another, supporting each other. 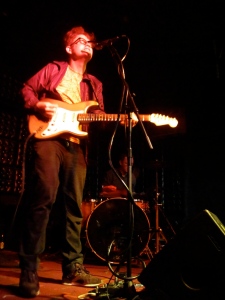 We want to thank a few friends who helped out promoting the show: Hilary and Tim Pyles at FM94/9 through the concert calendar listings on the Friday before and the locals only show on the evening before. Robin Roth wrote up an awesome posting on her website. We were also amazed that the show was even listed as alternate plans for both CityBeat and the Reader and SD Dialed In listed our show in her listings. Plus all of the bands that sent out the fb link to their mailing list. We thank you ALL for the extra mentions.

My favorite part of these evenings is meeting people who see a new band for the first time. For us, these events are not of selfish intentions. Sure we love seeing all of your awesome faces, but what we really want is to share the music we love with the world. And we are grateful for all who listen and come out to be engulfed by love.