Many of you know I skate under the pseudonym, Karma Electra. If not, where have you been? Often I have had discussions with other skaters about “what would your song be?” Say if you did an awesome move, jumped over a fallen skater, landed a monstrous hit on the opposing jammer or just needed a little extra motivation… the DJ would play YOUR song. Kind of like baseball players have. Kind of.

Anyhow, my song would be “Instant Karma” for many obvious reasons. How can you ignore such spot on lyrics as “Instant Karma’s gonna get you/
Gonna knock you off your feet…” It is nothing like “The Eye of the Tiger” or anything. But it is inspirational and fitting. So in honor of John Lennon’s birthday, here is John Lennon with the Plastic Ono Elephants Memory Band singing MY song. If I close my eyes, I can hear the crowd cheering for me as I blast my way out of the pack for my second or third grand slam. “We all shine on…”

Tomorrow night will go down in history. It will be the first banked track roller derby bout in over 30 years at the Del Mar Fairgrounds. At 7 p.m. in Wyland Hall, over 1,800 people will witness the San Diego Derby Dolls Banked Track All-Stars taking on the Mitten Kittens from Michigan on their shiny new track.

The Mitten Kittens are a team of skaters from several leagues in Michigan that also includes nationally qualifying speed skaters in the mix (who also happen to play derby). Some of them have also had experience on a banked track as extras from the movie, Whip It! 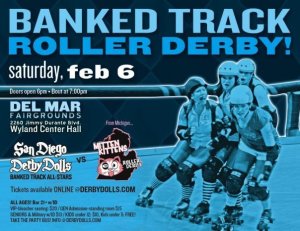 Tickets are going fast (bleachers seats are almost gone and the party bus from Bluefoot is already sold out). The cut off for online sales is at 6 a.m. Saturday morning. If you want to be a part of history, get your tickets NOW!
For more about the banked track itself:

Check out this 14 hour time lapse video of the track being built:

Here is Cherry Blue in all her glory, named for Cherry Punch, who made this track happen. It was Cherry who worked countless hours and whose sweat and blood was sacrificed. The blue stands for the turquoise blue that is the San Diego Derby Dolls. The padded uprights and rails will be covered in black and blue fabric in its final touches.
Cherry Blue will be stored onsite at Del Mar in a movable storage unit. It will take 4-6 hours to set up before a game and 4-6 hours after. If you are interested in being on this crew cause you love us so much, contact our bout production coordinator at SDEvents@derbydolls.com.

Junket is my new word for the week. I had never even heard of the word (amazingly) until yesterday when I actually went to one in LA for the movie, Whip It! starring Ellen Page and directed by Drew Barrymore.

Yesterday’s junket for Whip It! was a larger-than-life event that took place in the LA Derby Dolls’ Doll Factory in Historic Phillipino Town.

The excitement started out with Har Mar Superstar, aka Sean Tillman, performing the national anthem. I really didn’t pay much attention at the time so I didn’t realize that he was one of the actors in the movie (playing the coach to Juliette Lewis’s team) and that he has a song on the soundtrack called “Never My Love”.

Then the LA Derby Dolls Tough Cookies took the track against the Varsity Brawlers in the most publicized, over-the-top production for a practice bout ever. It was a thrilling bout that included a leg whip by Crissy Crassy and Leguna Beyatch, and at least one skater, Jacq Pot, flying over the rail. They will be playing again this Saturday for their regular season. The Tough Cookies won over Varsity Brawlers, one hundred and something to something less than that. Tough Cookies are currently undefeated, as are The Swarm (San Diego team).

Singer and actor, Landon Pigg, who plays Ellen Page’s boyfriend in the movie, performed the song “Hightimes” from the movie during half time. Again, I really didn’t pay much attention here, I was taking a look at the production booth, watching the emails fly in with questions for Drew.

At the end of the bout, the cast of the movie and Shauna Cross (aka the real Maggie Mayhem), skater and author of the book “Derby Girl” of which the movie is based, came out into the middle of the track for a Q&A session moderated by Axils of Evil, a popular KPCC radio host.

Here is the best photo I could get of the Q&A session with my camera phone right before it ran out of batteries.

Director and actor, Drew Barrymore plus Eve, Alia Shawkat, Landon Pigg, Zoe Bell, Har Mar Superstar, Juliette Lewis, Shauna Cross, Ellen Page along with LA Derby Dolls’ Rachel Piplica (aka the real Iron Maivon) and Kristen Adolfi (aka Crissy Crash) all shared the mic for an inspirational Q&A session. My favorite moment was when Juliette Lewis shared that she really just wants to work on her form (getting low and her starts to be specific).

Over 2,000 people watched the event online at http://www.derbydolls.tv. You can watch the entire event (in two parts) on Justin.tv. Check out some photos from the event HERE.

I managed to walk away from the event with a a prize pack from Fox Searchlight that included promotional items including the soundtrack, the book (renamed to “Whip It!), pins, sweatbands, a cup and a t-shirt. Definitely a sweet package, but no celeb meetings. That’s fine, I would rather see them on the track.

I did find out that the reason that celebs don’t skate is that the insurance with the movie studios doesn’t allow or cover it. I guess Patricia Arquette tried to join LA Derby Dolls in the past.

The Whip It! soundtrack comes out today via Rhino Records and the movie also officially premieres today at the Grauman’s Historic Chinese Theatre.

This past weekend I sat in front of my computer screaming at the monitor, not cause my computer crashed but because my teammates in the San Diego Derby Dolls were kicking ass at the Battle of the Banked: Capital Punishment Tournament in Austin Texas. They came home with the 1st place trophy, rightfully claiming their place as the best team in California on any surface and the best in the nation on banked.

But I realized as I was watching these intense games, we are just about there. Who really needs a TV to watch derby. As it stands now, I don’t have cable anyway. I have to go to the bar or over to my friend’s or family’s houses to watch the Chargers play or the Lakers game. Nearly everyone I know has a computer with the Internet. Streaming videos is common place now with sites like YouTube and UStream.

About a year ago, Derby News Network started broadcasting bouts as text-casts; enlisting the help of local derby fanatics to text the updates from a game. Slow and lacking the same intensity, the text-casts offered the derby community an outlet to see how your team was doing in a game that you could not be at. They got the points, penalties, lead jammer status and maybe when a key player took a spill. Viewers could give their two cents or shout outs like a standard moderated chatroom.

For nearly every tournament since August 2008, Derby News Network has broadcasted video boutcasts showing the true excitement and intensity of the sport. Text-casts still continue to this day as an entertaining communication tool to the eyes on the track.

This weekend is the East Coast Extravaganza in Philly, a large-scale flat track derby event featuring teams from across the US and Canada. And guess what that means? A weekend of watching roller derby streaming live straight to you. Derby News Network will be broadcasting (video and text) HERE both Saturday and Sunday, all games starting at 10:30am EDT.

Meanwhile, on the other end of the country, the LA Derby Dolls are streaming live the their double header for the first time in five years (or is it six). The Rookie skaters will duke it out in the Baby Doll Brawl. In between bouts, the Junior Derby Dolls will take the track showing off their moves. Kids in derby, priceless. The second match up will be the LA Derby Dolls B Bracket Team, the Aftershockers who will take on a combination of skaters from local Flat track leagues called the Prom Queens. HERE is the link that will take you to this west coast action. Bout starts at 3:30pm PDT, don’t be late!

I think this signifies a new era. We may not be on TV but the Internet reaches a wider audience and is much more portable. So if you haven’t got a chance to go see your local derby league play, check out the action online. Who knows, you may find you actually like it.

The Derby Dolls are trying some new things for this upcoming bout. 1) It is on a Friday night. I guess Del Mar was booked on the Saturday. 2) It is a theme night. 70’s flair is highly encouraged, but not required. 3) A double-decker party bus from the Arizona Bar in OB was added to the mix.

I hear something about drunken fun… well, that has always been my experience when it comes to double-decker buses. I usually don’t remember the whole experience. Penny McSquish will be your party wrangler for the night making sure you get on the bus in both directions because we realize it would really suck to sleep in the horse stalls at Del Mar Fairgrounds.

Well if you want to have a great time and remember the game, drive to Del Mar sober, pay $9 to park and buy a $12-$20 ticket to the bout. OR take the party bus for $25 and don’t worry about a thing… parking, ticket, and beer & soft drinks are included. So even if you are not drinking this is a great deal. Don’t pass this up. If we don’t sell out, we may not be doing this again. Yes, that is a very real threat.

Go to the Derby Dolls website to purchase tickets.