With little expectations of actually accomplishing much or seeing anyone in particular, I ventured downtown Wednesday night after work to see the hubbub that is Con (well, that seems to be the word on the street). Once at the convention center after walking a fair bit from my free parking spot in East Village, I managed to grab my pass with considerable ease to the point I was unsure if I cut in front of a huge invisible line.

Immediately, security ushered me towards the exhibit hall where I suddenly felt very small. Without direction and too impatient to look in the event guide, I started poking around looking for something I could relate to. DC and Marvel were concepts and characters I knew more like advertisements on a cereal box: colorful, frozen lifeless forms trying to sell me something and not really of interest to me. Without cable shows like Doctor Who, True Blood and Community completely passed me by. And I am NOT a collector. Anytime my husband and I receive two like objects, they are immediately separated for fear someone may see them, assume we are collectors of said object, and proceed to buy us more.

Booths rousing my curiosity ranged from the Asian pop culture magazine/toy vendor, Giant Robot…. to the creative Haunted Memories changing portraits… to the simple stick figure drawings of the Kingdom of Loathing role-playing game. As many times as I have sent my family the hilariously funny Hoops and Yoyo greeting cards, it  seemed vaguely appropriate to pose for a photo with the life-sized versions and include a link to their amusing Sarcastic Wednesday animated e-card. By the way, they are not so entertaining in real life. 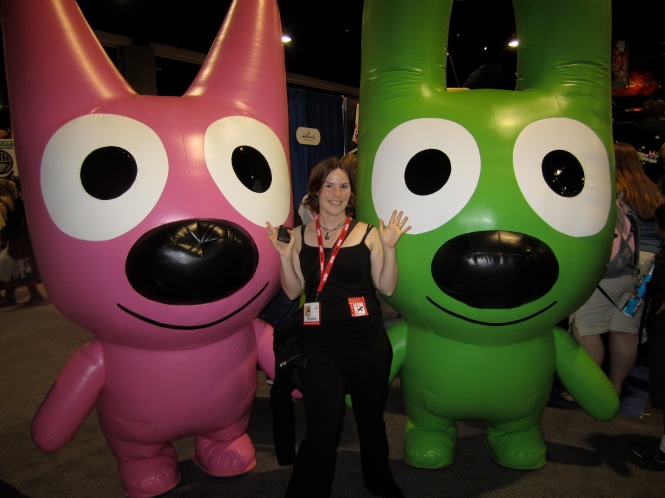 Lines formed in every direction for the super fans or just the super cheap to get their limited edition items or free crap give-aways. I managed to escape with very little crap… only the gi-normous bag that I will never in a million years wear or use. I might have to give it away to one of the many people whose bag straps broke from the mounds of memorabilia they gathered in the first few hours (maybe even minutes) of being at Comic-Con.

The best part of my night was discovering a friend from my high school art class, Tony Washington is now artist for World of Warcraft comics. It was late in the evening, so we didn’t have time to chat, but I will be heading back this weekend to catch up on old times. If you are around, check him out in the Artist Alley, booth #FF-22.

The only thing I found disappointing was the lack of costumes. Perhaps it was because it was the opening night with theoretically mostly industry and media peeps, but still sad. Far and away the best costume of the night was the sock monkey. Hopefully these geeks step it up this weekend. I expect more flair of the extreme variety!